A Conversation with Richard Dreyfuss 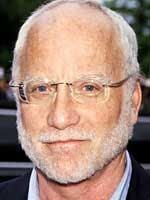 I happened to turn on the radio and started listening to The Diane Rehm Show on NPR. She was interviewing Richard Dreyfus and I was soon engrossed by the program. What impressed me most was Richard Dreyfus’s prolific insight on Civics and the current political environment.

Below is the link to the transcript of that interview.
http://thedianerehmshow.org/shows/2011-01-24/conversation-richard-dreyfuss/transcript

In speaking of the late President Kennedy, Richard Dreyfus said:
“In speaking of President Kennedy, that he had said things that were ahead of its time. He really was, I think, the last American president to lead the people. Sometimes to places where they didn't want to go and were reluctant and sometimes to a place where they wanted to go. And thankfully, civility is one of them and I had the privilege a few weeks ago -- a few months ago of watching his televised speeches about Civil Rights and it was a real shock to see an American president clearly out ahead of his majority. He was ahead of us and he was saying something that if we don't come to this place, we will have failed ourselves morally and it was a hell of a statement.”

Dreyfuss went onto say, “With such a peace, there will still be quarrels and conflicting interests as there are within families and nations. World peace, like community peace, does not require that each man love his neighbor, it requires only that they live together in mutual tolerance, submitting their disputes to a just and peaceful settlement. And if we cannot find an end to our differences, at least we can make the world safe for diversity. For in the final analysis, our most basic common link is that we all inhabit this small planet, we all breathe the same air, we all cherish our children's future and we are all mortal.”

“Yeah, it's not a pretty picture and what he was doing in 1960, he could've been saying in 1760 or in 1460 or any year before that. Human nature is what it is. We are not Jaguars, we are not built for perfect efficiency, we don't laze away on a nice sunny day while the river runs dry and we don't always hunt only the huntable. We are human and we are diverse and we are silly and stupid and bright and intelligent and what is so extraordinary about the Constitution is that is was able to take into its creation the flaws and virtues of mankind as opposed to ignoring mankind completely.”

This next statement really impressed me:
Richard Dreyfus then went onto say, “When I ask students what was so revolutionary about our Revolutionary War, the answer is usually that we broke away from Great Britain. And I say, no, it was that for the first time ever, we were actualizing the idea that the ruler and the ruled were one thing and that the people were not the audience to the performance of the nobility, that we were all the same value and all contributed. And that was at the time probably the most important message in 13,000 years of politics.”

Later on in the program Diane Rehm played a segment from Mr. Holland’s Opus where Richard Dreyfus’s charter states:
“No, no, do not misunderstand me. I am not talking about my job. I am talking about the education that students once got at Kennedy High versus the education that you people are willing to give these kids today.” Then later goes on to say, “Oh, come on, Michael. You know, the big problem here is that you people are willing to create a generation of children who will not have the ability to think or create or listen.”

Diane Rehm then asked, “And it would seem to me that in real life, Richard Dreyfuss, you believe that what teachers consider to be their best right now is not good enough. And that students are not living up to what they could.”

Richard Dreyfuss reply, “There's a word in English that should be far more familiar to all of us and the word is exemplification. You can't exemplify reason or logic or goals of virtue unless you exemplify them and if you only exemplify, for instance, the public discussion of politics as something that is yelled and screamed and interrupted and patronized, then that becomes public discourse. And because you cannot scream reason, your advertisers will support screamers first. And so you raise two, three generations of people who don't know what reason sounds like, who don't know what a public discussion of a public issue can sound like without the melodrama of talk show radio or being demonized. And when you have a representative democracy, sooner or later, you have to get down to a definition which includes the willingness to share political space with those with whom you disagree, but if you demonize, you're not sharing anything.”

Later again in the program, Richard Dreyfuss said he had written the article because, “I was so hurt and offended by President Bush's casual inclusion of torture in the American Political Lexicon, something that had almost achieved the iconic level of taboo and he brought it back as if it was, you know, higher taxes or lower taxes.”

To later continue on with this thought:
“Teach our kids practical political power, teach it to them as their brains develop and can accept it more and more in its complexity, but teach it to them before they graduate high school so that they have a sense of ownership and pride. And that the next time someone tries to steal America, which is now a commonplace daily activity -- when someone tries to steal America from Americans, those future monarchs of this system will know when they're being flimflammed and what to do.”

“The fundamentals aren't there. When I was a kid, I was in love with America. I was -- my father and his generation had saved us from the most vivid civics lesson in history, Adolph Hitler. And when Hitler -- when we realized that Hitler meant every word he said, we stopped the whole world, went over to Europe and beat him to death because we knew we were not going to do that world.”


“But when it comes to the study of history and the study of the ethics involved with the writing of the Constitution and how incredible a coincidence in history it was that we could gather those men from the enlightenment era and actualize something that no one had ever thought to actualize. For them to do that and for us to learn it in its context is to make people aware of a pride of a country that is deserved and substantive, as opposed to being asked to love your country for no particular reason whatsoever.”

Diane Rehm then asked, “Is that your great concern that young people do not, in this era, grow up with the sense of pride in their country? “

In which Richard Dreyfuss replied, “I think it's one of the consequences. Another probably more important is that we grow up without any sense of connection and responsibility. We grow up without accountability and we grow up oddly enough without reward and punishment. Republican democracy is a two-way street where the people are not only the rulers, they are the people. And not only are they the rulers and the people, they are the neighbors in business, they are the neighbors in nursing, they are the neighbors who you are, in one way or another, accountable for and to, to make your society better. And when you remove that sense of responsibility from, let's say, local business and local business starts to recreate what used to be known as let the buyer beware, I can sell you a piece of junk. And if you don't catch me you can't do anything to me.”

I highly suggest everyone go to the link site and read for yourselves the transcript of this interview program. I personally found it to be very epific, and thought provoking.
Posted by Engineer of Knowledge at 7:46 AM